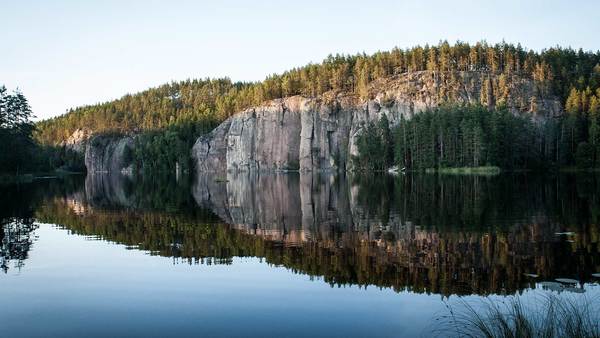 Together, Repovesi National Park and Aarnikotka Forest Nature Reserve, owned by UPM, form a large backwoods that is dotted with tens of lakes and ponds, where outdoor enthusiasts can hike the trails and paddle in waters that are full of intriguing stories, all the while surrounded by memorable landscapes. This beautiful area of protected forests and lakes and the Verla historical site are connected by the significant role that the forest giant UPM plays in the life of the region.

The company’s forests and mills

Repovesi has been full of life since the beginning of time. The area has always been an important site for hunting. In the 17th century, slash-and-burn agriculture and tar burning brought forestry on a larger scale. This lasted for about 200 years, until the 19th century. Water-powered sawmills started to use wood on a small scale in the 18th century. The peak of the forestry era took place between the late 19th century and the 1970s. In 1913, ownership of most of Repovesi’s forests was transferred from Rudolf Elving to the Kymiyhtiö company, now known as UPM, founded in 1904. The forest industry in South-Eastern Finland grew rapidly, and the company had to ensure a steady supply of raw wood material. The forests of Repovesi therefore became property of the company. The area became very valuable to wood sourcing thanks to the great log driving routes; the Savonranta municipality was formed in the late 19th century and the forest road network was built between 1960 and 1970.

While the ever-increasing need for wood raw material from the Voikkaa, Kuusankoski and Kymintehdas paper mills was met by the forests of Repovesi, Verla had its spruce material transported in from the northern parts of the Mäntyharju waterway. As competition increased, people in Verla also noticed the need to ensure the supply of raw materials and actively began acquiring woodlots. Verla’s extensive forest landscape was one of the key motives for the transfer of ownership in 1922. Verla—and Kissakoski Oy that had acquired Verla two years earlier in 1920, were both transferred to the Kymin Osakeyhtiö company.

Under the direction of the company, both Repovesi and Verla were active forest industry production units that brought wealth to the surrounding area. Repovesi ensured the supply of wood raw material for the mills, while Verla was famous around the world for its high-quality cardboard.
The forests of Repovesi were used extensively until the 1970s, and the landscape was characterised by commercial forestry and felling. The last large-scale tree logging in Repovesi took place in 1977; after that, logging in the area began to decline. Between 1997 and 2001, UPM set up a strategy to protect the biodiversity of its forests, and in May 2002 it donated its lands to the government. The company also filed an application for the area to be brought under the protection of the Finnish Nature Conservation Act. As a result, Repovesi National Park and Aarnikotka Forest Nature Reserve were formed on 1 January 2003. The company’s forests took on a new, important role between humans and nature.

Verla’s era of active industrial production came to end in 1964, when the old machines of the mill produced their last piece of cardboard to be exported, and the remaining workers retired, together with the mill. After a few years of preparation, the decision was made to transform the mill into a museum in June 1969 and it opened its doors to visitors in 1972. The area had become an important recreation area for the employees of Kymiyhtiö, so converting it into a museum was a great way of improving the well-being of its employees, as well as offering the general public an opportunity to explore this significant time in the history of the area’s forest industry. Verla became a World Heritage Site in December 1996 on the basis of the following criterion: the Verla Groundwood and Board Mill and its associated residential area is an outstanding, remarkably well-preserved example of the small-scale rural industrial settlements associated with pulp, paper and board production that flourished in northern Europe and North America in the 19th and early 20th centuries. Only a handful of such settlements survive to the present day.

Together, the Repovesi area and the Verla World Heritage Site comprise an exceptional part of the history and nature of the Finnish forest industry. Numerous stories about hunting, log driving, contracts and the felling of trees, as well as large-scale conservation and protection of biodiversity, create a colourful and intricate environment for visitors who enjoy nature and history.

Your order
If there is an active order you can find it here.